While lemon recipes are notoriously popular in the spring, lemon-anything is right up my alley. I try to work the flavor into recipes that are more seasonal and ..ahem.. currant. (Har har..) 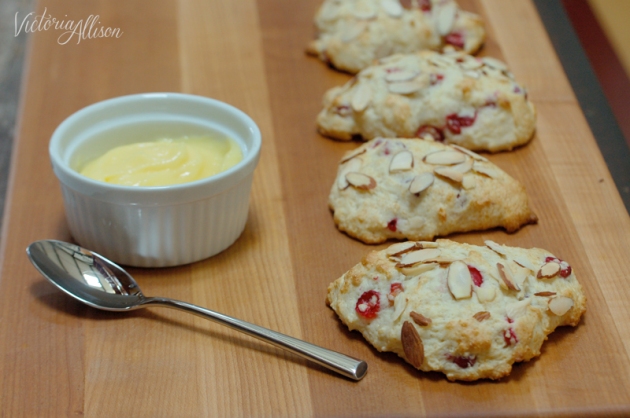 I had some fresh cranberries that needed to be used up, and some leftover lemon curd – which probably would have otherwise been eaten straight from the fridge by the spoonful. Instead, I tried a recipe for Cranberry Scones. They were really easy, and delicious! The perfect mix of tart cranberries, savory almonds, and sweet lemon curd. 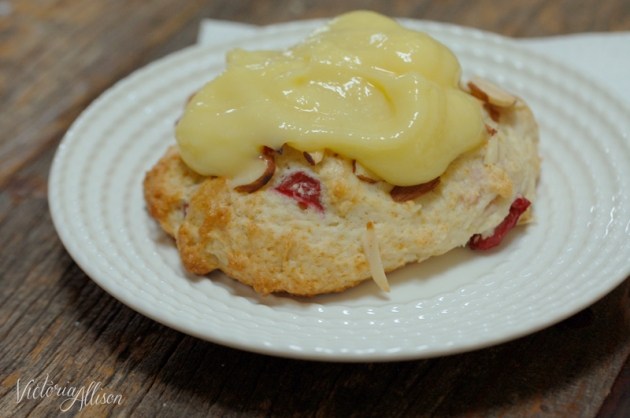 I’m not certain if there’s a recommended serving size, but I just loaded it up by the spoonfull(s). I’ll definitely be making these again!

Preheat oven to 400 degrees F (205 degrees C) and place rack in middle of oven. Butter or line a baking sheet with parchment paper.  In a large bowl, whisk together the flour, sugar, baking powder and salt. Cut the butter into small pieces and blend into the flour mixture with a pastry blender or two knives. The mixture should look like coarse crumbs. Gently stir in the cranberries and mixed fruit, making sure not to crush the berries. Add the milk and stir until just combined. Do not over mix.

Transfer to a lightly floured surface and knead the dough four or five times and then pat, or roll, the dough into a circle that is 7 inches (18 cm) round and about 1 1/2 inches (3.75 cm) thick. Cut this circle into 8 triangular sections. Transfer to the prepared baking sheet and then brush the top of the scones with milk or cream. Sprinkle with sliced almonds.

Bake for about 15 – 20 minutes or until lightly browned and a toothpick inserted into the center of a scone comes out clean. Remove from oven and place on a wire rack to cool.   If desired, serve with Devon cream and/or your favorite jam.

———–
This is my go-to lemon curd recipe. It’s so easy and always turns out really delicious. The entire recipe can be made from start to finish in about 15 minutes. Try this once, and I guarantee you won’t want to ever buy pre-made lemon curd again. (Nor should you!)

Whisk together juice, zest, sugar, and eggs in a 2-quart heavy saucepan. Stir in butter and cook over moderately low heat, whisking frequently, until curd is thick enough to hold marks of whisk and first bubble appears on surface, about 6 minutes.

Transfer lemon curd to a bowl and chill, its surface covered with plastic wrap, until cold, at least 1 hour. (Can keep chilled in the refrigerator 1 week.)

If you find yourself with some extra lemon curd left over and want to know what else to do with it, I also have a recipe for lemon curd stuffed vanilla cupcakes, with coconut topped frosting. Check it out! https://victoriaallison.wordpress.com/2012/04/27/lemon-curd-stuffed-cupcakes-with-vanilla-frosting-and-coconut/

This recipe can really be described in just a few words: fresh, sweet cherries, buttery crumb cake, and a hint of almond. It’s sort of a multi-occasion treat – served best warm, or cold, or for breakfast, or for a mid-day snack, or even for dessert… and probably amazing with fresh whipped cream, although I didn’t think to make any before we cleaned out the entire pan. (Twice… I’ve made this two times in the month of July already, it’s that good!) 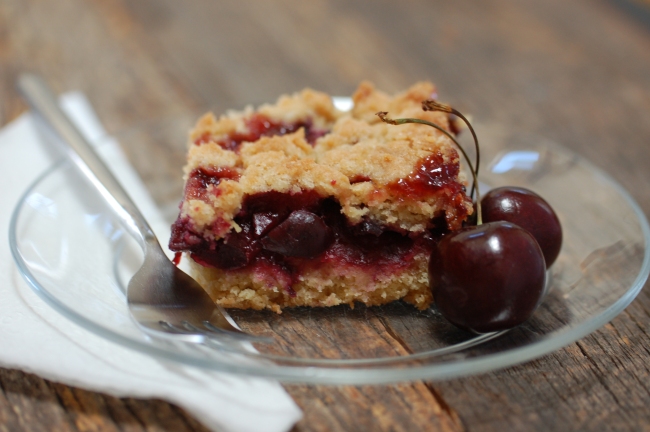 If I were to change anything else, I’d probably sprinkle sliced almonds onto the top layer of the batter before putting it in the oven. I did add a little splash of vanilla extract and almond extract to the cherry filling,, which wasn’t called for in the recipe but was something I felt it needed. I also omitted the orange zest, as we had fresh squeezed OJ but no zest. 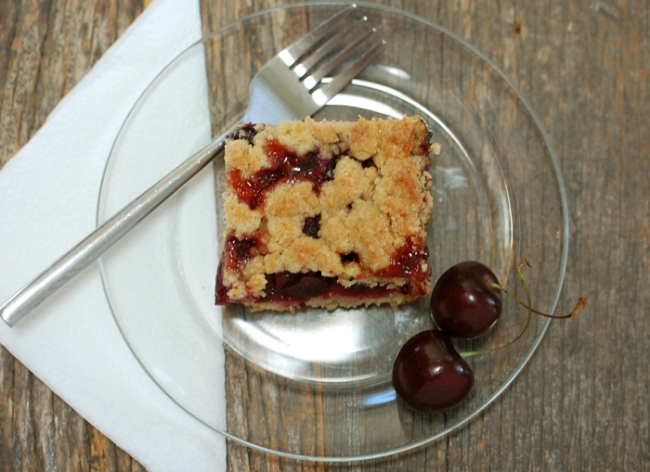 *splash of vanilla extract and almond extract (about 1/2 tsp. each) Optional, but I liked the addition

In a large bowl (or food processor), stir together 1/2 cup brown sugar, 1/2 cup white sugar, 3 cups flour, and baking powder. Mix in salt and orange zest. Use a fork or pastry cutter (or pulse mixture if using food processor) to blend in the butter and egg. [I used my hands to gently mix. It was more fun, and achieved the same consistency.] Dough will be crumbly. Pat half of dough into the prepared pan.

In another bowl, stir together the sugar, cornstarch, juice and zest of one orange , *and extracts, if using. Gently mix in the cherries. Sprinkle the cherry mixture evenly over the crust. Crumble remaining dough over the berry layer.

Bake in preheated oven for 45 minutes, or until top is slightly brown. Cool completely before cutting into squares.

I love pumpkin! (Unless it’s in pie, that is.) Pumpkin whoopie pies, pumpkin muffins, pumpkin cheesecake, and even pumpkin marshmallows, but pumpkin pie? Blech. No thanks. You can keep it!

Once July rolls around, I start thinking about fall, and pumpkin recipes. I saved this one on Pinterest a while ago, and have already made it twice this season. Actually, the first time was probably in July. Or maybe August. Either way, Fall was not on most people’s minds, but I needed a pumpkin fix. The recipe was amazing, and we ate the entire thing before I had time to take a few photos.

Naturally, I wanted this recipe documented here, so what better excuse to make it yet again? 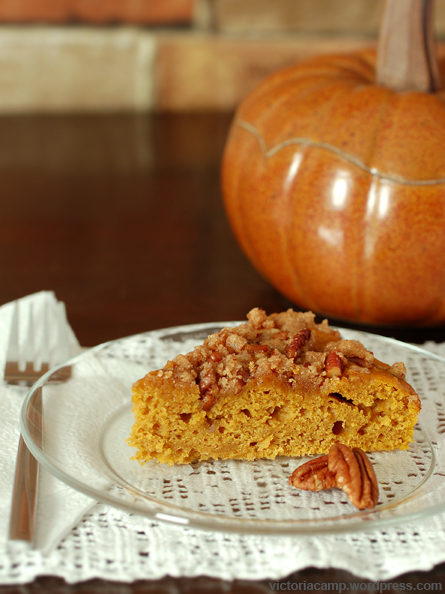 I have a tendency to make slight modifications to my baked goods. The first time I made this, I used half whole wheat flour, and half white flour. The second time, I was out of whole wheat flour so I just used all white flour, and used pecans in the streusel topping instead of walnuts. I also used vegetable oil instead of butter for the cake part, both times. (Butter for the topping, of course!) 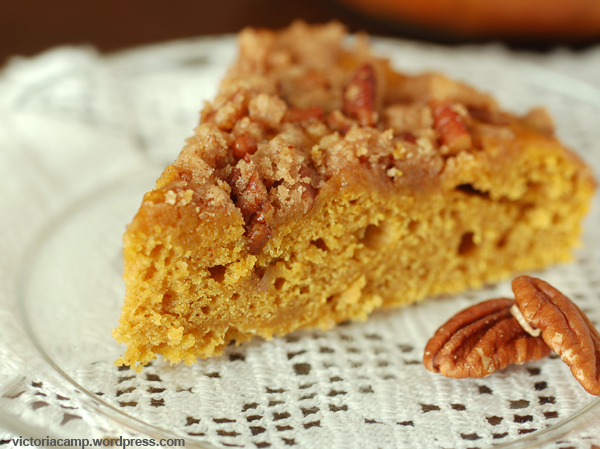 Honestly, this recipe is super easy. I make a half batch, which fills up a single 8 or 9-inch cake pan. Plenty for two people. Or more, if you like sharing. 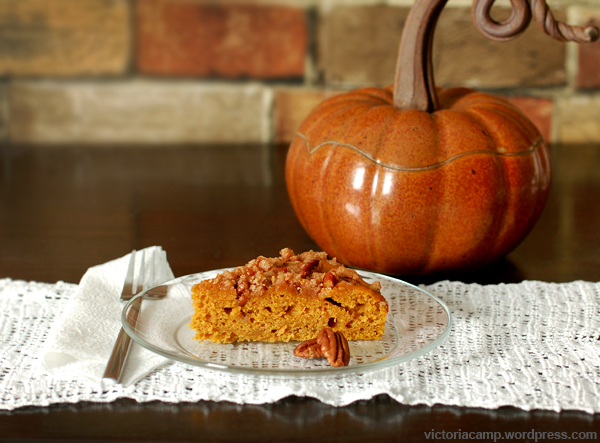 I had to include my favorite Pumpkin Jar in this shot. Isn’t it adorable? I never put anything inside of it, because I can’t decide on what. It’s handmade by Bauman Stoneware. (Their Etsy shop looks pretty much sold out at the moment, but you can click on their sold items page to see more of their amazing designs. I want one of their fabulous teapots!) 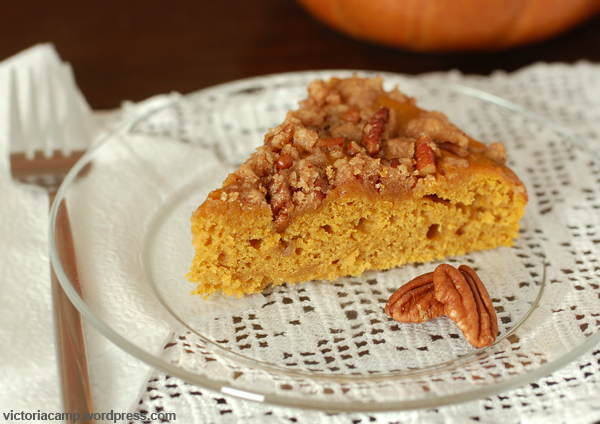 Onto the recipe! I originally found it posted on the blog Not So Humble Pie, who made theirs with a icing glaze.

Preheat the oven to 350°F. Spray the inside of a tube or bundt pan with nonstick spray; set aside. In a large mixing bowl, beat the butter and sugar on medium speed until well blended. Add the pumpkin and eggs and mix thoroughly. In a medium bowl, combine the flour, baking powder, cinnamon, ginger, nutmeg, cloves and salt. Add the flour mixture to the pumpkin mixture. Mix on medium speed until combined. Pour the batter into the prepared pan. Prepare the streusel topping: In a small bowl combine the flour, sugars, cinnamon, melted butter and walnuts. Sprinkle the streusel over the cake batter. Bake for 50-55 minutes or until a toothpick comes out clean. Cool on a wire rack for about 15 minutes. Slide a knife around the pan so the cake doesn’t stick when removing it. Invert the cake onto a plate. Then invert the cake onto another plate, so that the streusel is on the top. Cool completely. Cover and store at room temperature.

(For two round cakes: coat two 8-inch rounds with non-stick spray and place a circle of parchment in the bottom. Divide the batter between the two pans, top with the streusel (x3) and bake for approximately 35 minutes, until a toothpick comes out clean.)

*As also mentioned, I made half of this recipe, in an 8-inch cake pan. (Or maybe it was 9-inches? I can’t remember offhand.) I baked it for 30 minutes.

Today I realized that out of all the things I’ve made, cinnamon rolls never made it to the list. Shocking, since they are one of my favorite things to eat! I wanted something a little more adventurous than regular ‘ol cinnamon rolls, and noticed I had 2 very ripe bananas on the counter.. it was meant to be!

Given that I didn’t have a “go to” cinnamon roll recipe, I found one for pumpkin cinnamon rolls (which, by the way, looks delicious as well!) since it already had “extra” ingredients in the list and seemed like something I could work with if I wanted to add the banana, etc. 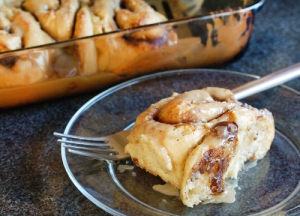 They came out great! Hooray! 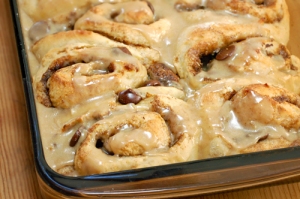 I made a few changes to the recipe, but overall I used it as a guideline, and I did keep the delicious butter & brown sugar glaze!

This is one of my all time favorite recipes for fall; it’s quick, easy, and surprisingly healthy! Aside from that, it’s delicious.. Sweet apples combined with tart cranberries, crunchy granola, and autumn spices make for a prefect introduction to fall. 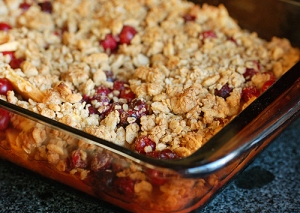 Fresh out of the oven! 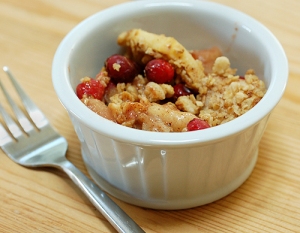 This is probably a serving size.. but, uh.. I probably eat two servings in a sitting.

This post wouldn’t be complete without the recipe, of course!

Top this comforting autumn crisp with a scoop of vanilla ice cream of a dollop of yogurt before serving, if you like.

Preheat oven to 350°F. Combine apples and cranberries and pour into an 8- or 9-inch square baking dish.

In a small bowl, whisk together apple juice, flour and pumpkin pie spice. Pour over the fruit. Sprinkle granola evenly over the fruit and lightly press down. Bake until hot and bubbly, 40 to 45 minutes. Serve warm, room temperature or cold.